From a tender age filmmaker Shari Petti always had a connection with the arts. Her determined yet tenacious spirit has molded her into the avid filmmaker and documenter of creative content that we see before us today. Her name may be familiar to you from the Trinidad and Tobago Film Festival or you might have seen her name floating around social media alongside her work for mas band Lost Tribe. Either way, although still early in her career as a filmmaker, this 23-year-old creative is one to get familiar with as she continues to make new waves with her craftsmanship (or, should I say ‘craftswomanship’?).

After spending most of her childhood obsessing over the idea of becoming an actress, Shari joined a drama company called DMAD Company. Under the direction of Andre Dillon, she got the opportunity to enhance her acting skills and be on stage often. In addition to which she  was able to participate in the New Actor’s Workshop at the Trinidad Theatre Workshop, as well as the Advanced Actors Workshop that gave her the opportunity to appear in commercials and several other theatre-related productions. Yet, this budding actress found her way behind the scenes and more so behind the camera after volunteering to work on set of a movie. After some prompting by her then superior, Princess Donelan, tow pursue film academically, Shari truly decided to go after her dreams and got more involved in the field.

Shari has now found herself showing stories of the Trinbagonian culture and her well known social commentary ‘Sorf Hair’ is one to mention. Although she describes herself as a little awkward at times, she loves experiencing new cultures and our very own Trinbagonian culture. Inspired by people, Shari continues to produce and create amazing stories worthy of being acknowledged. We are inspired by her love for creating and are very happy to share with you more about her journey as a young filmmaker. Here’s what Shari had to share with the XX Team.

Tell us about yourself – if you were asked to describe who is Shari, what would you say?

I love to laugh and make others laugh. I love travelling and experiencing new cultures and I am especially in love with my own culture here in Trinidad and Tobago. I was fortunate enough to do what I love despite many odds and, as a result, I would consider myself to be a very grateful person. I am also really bad at describing myself but I swear once you get to really know me you can’t get enough, I hope.

Did you always dream of becoming a filmmaker? Why did you choose this field?

I actually never even thought about filmmaking at all until 2015 when I was 19 years old. While I was growing up, I always dreamed of becoming a singer, I was (and still am) obsessed with Whitney Houston from a very young age. While at primary school, I joined the school’s choir and I would sing all the time. I also wanted to be an actress, which was sparked in me after seeing Spike Lee’s ‘Crooklyn’ which stars Troy, a nine-year-old girl of African descent. As I grew older I was drawn more to acting, so I joined a drama company called DMAD Company. There, under the direction of Andre Dillon, I was able to enhance my acting skills and got the opportunity to be on stage often. However, the acting world is super subjective and competitive, and a lot of times it has nothing to do with how talented you are so I soon became a bit despondent because I kept getting rejected at auditions. However, one day I saw a casting call for extras for a feature film and I decided to apply since I never got the opportunity to be on a movie set before. While on set, I asked one of the crew members (now my mentor, Leslie-Ann Wills-Caton) if I could volunteer (on set) for free, (low key because I wanted to network with filmmakers, make them like me and put me in their films…that never happened by the way). Instead, I fell in love with the behind-the-scenes aspect of filmmaking. I loved the energy, the pace, the camaraderie (maybe the free breakfast, lunch and sometimes dinner). My superior on set, Princess Donelan, then heard that I applied to study Geography at the University of the West Indies (UWI). She asked, “Why don’t you change your major to film?” I said to myself, “What? This is literally my first time on a movie set, I’ve never used a camera a day in my life…why would I do that?” Despite questioning myself, the next day, I went to UWI and changed my major to Film Production. I spent the summer as an intern at a film production company, Pixel Play Media.

Who/what inspires you? Who is your role model?

I take inspiration from everywhere and anybody. There will be little things that people do that stick with me. I’ve been that way all my life. I people-watch a lot, so for example, if I see a woman in the road walking and she seems super confident, I would remember that, lock that in my brain, and try to implement similar traits in myself. To be more specific, any person doing something that I want for myself, inspires me. For example I love Beyoncè because she is a hard worker and a perfectionist, and I want that for myself. I love Issa Rae because she made it cool to be herself – an awkward girl of African descent, and her personality is similar to mine so I keep up with her work and life all the time. I also love how she used the Internet to distribute her work and make her own audience and platform and to represent the people she wants to see on screen. I am inspired a lot by my culture as a Trinbagonian, especially the ‘not so mainstream’ culture (and by mainstream I mean what people my age are into). I listen to a lot of Lancelot Layne, Andre Tanker, 3canal, old calypsoes. I love going to the traditional and cultural events during Carnival and year-round, and the music and exposure to that part of my culture influences how I approach my work.

Any special achievements worth mentioning?

In school, for two consecutive years, I was awarded Best Film Studies Student and Best Overall Film Student. My first documentary short film ‘Sorf Hair’, which I did as a class project, screened at several film festivals around the globe, and won the People’s Choice Award at the Trinidad and Tobago Film Festival (an unexpected win for me). It was also nominated at the Pan African Film Festival and Nouveaux Regards Film Festival for Best Documentary short. The Pan African Film Festival was actually my dream festival at the time, so when I submitted my film I didn’t expect to be accepted. I thought maybe in five years when I have more work under my belt they would accept me, so that was an awesome thing for me, personally. I was fortunate enough to attend the festival in LA, where I met Issa Rae who was across the street from my screening location. I’ve had many other cool accomplishments since then. I think the one that stands out the most would be getting to go to Sharjah (a city next to Dubai) last November with fellow filmmaker Maya Cozier to film artist Christopher Cozier’s installation for the 14th Sharjah Biennial. In addition, earlier this month, I had the opportunity to represent Trinidad and Tobago as a youth delegate for the International Youth Forum on Creativity and Heritage along Silk Roads in China – that was a mind-blowing experience.

What struggles have you faced on your journey to becoming a filmmaker? Do you think you are treated differently being a woman in this field?

The main struggle which plagues many filmmakers, is access to funding. All of my projects have been self-funded for the most part. I don’t allow it to prevent me from my work but I know I will be able to do a lot more if I had financial backing. I do not focus too much on the fact that I am a female in a male dominated field, to be honest. I focus on doing the work and not so much on what other people think. The only time I feel the effects of being a female filmmaker has been in meeting men who do not know me or my work. I observe their body language and things they say. I can tell they do not expect to see anything worth watching from a female. Then, when they see my work, their attitude towards me changes. I remember one time a guy saw me with a camera and said, “You know how to use that?” I didn’t even respond because I am secure enough in myself to not let a comment like that affect me. I don’t dwell on those experiences. I work for myself, have my own clients, and most people come to me because they know the kind of work I produce so they trust my vision.

What is your most memorable experience?

My most memorable experience is having sold-out screenings for my film at the Trinidad and Tobago Film Festival, and then again a sold-out, independent screening of the film at the Big Black Box (along with Maya Cozier’s Short Drop), to the point where we had to show the films again for people who did not get to see it the first time. I was never a popular person while I was growing up and never hosted an event before, so I was very anxious about the screenings and worried that no-one would show up. It definitely surpassed my expectations and I was overwhelmed by the immense support.

Tell us about any projects you in which you are currently involved.

Currently, I am shooting a documentary series, to be distributed on the Internet. It will be out later this year. I am also testing the “narrative film waters” and trying my hand at writing. I was also the Casting Director for Maya Cozier’s film ‘She Paradise’. I do a lot of work with The Lost Tribe so I’m looking forward to visualising more ideas this year.

What was it like seeing your first film come to life for the very first time?

It was quite overwhelming, especially because I had the idea in my mind for two years. It was magical seeing something move from a thought, to a written proposal, to the first day of filming, to the final edit.

Are there any other female filmmakers that inspire you?

Ava Duvernay, Melina Matsoukas, Euzhan Palcy and once again, Issa Rae – all amazing filmmakers that I look up to for different reasons. I especially love Euzhan Palcy because she is a Caribbean filmmaker from Martinique who wrote and directed a film called Sugarcane Alley. It has made waves in the French-speaking Caribbean and Europe, and she was only 26 when she made it. She was also the first female of African descent to direct a Hollywood Studio Film – absolutely amazing, definitely an inspiration.

Take your work seriously if you want to be taken seriously. Do the work, do your research, always practise and study your craft. 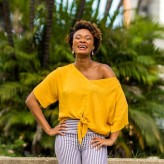 Sache loves all things Beauty & Caribbean and she enjoys discovering a combination of both!