Late at night, in an English nightclub, TriniDad & TooGayThough takes the stage. A neatly-folded Trinidadian flag sits at the top of the performer’s head like a crown and facial hair lies flat on his face; a pronounced unibrow and chinstrap. Dark strokes of hair peek out of a black vest (or what we Caribbean folks call a “wife-beater”). It’s tucked into baggy denim shorts with boxers hanging over the edges. Oh, and an ites-gold-and-green striped belt keeps it from falling to the floor, of course. Below, there are clean, newly-polished Clarks with no socks in sight. One thing is certain: The performer’s appearance and behaviours reflect those of a man, but there’s a woman underneath it all.

Emily Aboud, a Trinidadian-born London-based theatre director, film director and writer, prides herself on being a drag king. Now, you’re probably familiar with drag queens, which refer to men impersonating women dressed in stereotypical feminine clothing adorned with elaborate makeup and wigs. Drag kings are just the opposite—but for some unclear reason, they’re represented less than drag queens in media and pop culture. Naturally, you might carry a slight sense of shock while hearing about it or seeing it—and that’s ok, because that’s the whole point of the art form, anyway.

Performing in drag isn’t necessarily rooted in questioning one’s gender, although that’s what it’s commonly perceived to be (and of course, this exploration is valid). Many feminist, intersectionalists and queers perform drag to entertain and to challenge gender norms through lip-syncing, dancing, stand-up comedy and poetry. For Aboud, dressing like the average Caribbean man and lip-syncing misogynist lyrics from artists like Vybz Kartel, Popcaan and Machel Montano seemed like the most effect way to battle sexism. “Satire is the most important art form to spark change. When you want to change someone’s mind, yuh hadda make them laugh,” she says. “When women are playing men, it can be so sexy, then ultimately confusing because the performer is messing around with your perception of gender.” This is something she felt inclined to share.

Alas, there’s a new show in town: “Splintered: a cabaret of empowerment”. With leading acts by Cherisse Berkeley, another drag king, and Deneka Thomas whose chosen weapon is spoken word, the show on Friday, January 4, 2019 at 8 pm at Big Black Box (33 Murray Street, Woodbrook) is sure to keep you on the edge of your seat, doubting practically everything you know.

“Science and art are the same. They’re both asking the same question, which is ‘Who am I?’ Art looks in and science looks out.

Cabaret is broadly defined as “a performance of popular music, singing, or dancing, especially in a restaurant or bar” (thank you, Cambridge dictionary). “Splintered” is a platform for marginalized voices and young artists who are female or queer —what Aboud refers to as “splintered off of society”—to express themselves. She rented the space and invited others to explore what it means to be an outsider and to challenge heteronormative and patriarchal constructs. Although she is directing the piece as a whole and hosting the event as MC, she says it is more about the facilitation of young artists. This is not the space for individual direction, this is a space for exploration and sharing. “I just wanted a place for us to play,” she says. “And selfishly, I want to perform my act at home.”

At the ripe age of 10, Aboud saw Lilliput Theatre, the island’s first children’s theatre company, in concert at Queen’s Hall. Shortly after, she eagerly joined the troupe and stayed in production up until leaving for university. Earning a scholarship to study sciences, she enrolled at the University of Edinburgh and split her time evenly between the theatre and laboratory. After graduating with a bachelor’s degree in mechanical engineering, Aboud set out to follow her dreams in the world of drama, moving to London and completing her masters in theatre directing at Mountview Academy of Theatre Arts—being the first Caribbean woman to do so.

You’re probably thinking, “How the F do those two co-exist?” Aboud explains, “I believe that science and art are the same. They’re both asking the same question, which is ‘Who am I?’ Art looks in and science looks out.” Her background in engineering plays into theatre tech with movement, lights and sound. In 2018, Aboud directed a show called “Fireworks” in which characters’ faces were illuminated by the light reflected in mirrors strategically placed on set. The year before, she directed a 5-star sellout run of the musical Spring Awakening at the Edinburgh Fringe Festival in Scotland. She credits her engineering background, which aided the design of the set, using simple wooden chairs to become multiple set pieces—a piano, a stable, mirror. “That’s just math,” says Aboud. “It’s wonderful and interesting.”

Aboud has worked with the United Kingdom’s Hampstead Theatre, Theatre503, TheatreN16 and the Polka Theatre. Most recently, she won a directing scholarship at the Bush Theatre, becoming an associate artist. She will be able to pursue her own work while receiving support and guidance from the artistic director of the Bush Theatre, Madani Younis. In collaboration with the other scholarship winners, a playwright and producer, the three will take over the theatre in June 2019, directing pieces and running workshops. She formed her own company, lagahoo productions, to write and devise feminist work for Caribbean audiences.

Even though a decade has passed since Aboud left Lilliput, she credits her mentors Noble Douglas and Wendell Manwarren for her success. From a young age, Lilliput encouraged her to create her own pieces and use her body as a medium to tell stories in a different way. “There, we used theatre-for-the-oppressed techniques that’s miles ahead of what I did in university,” she says, “just reading scripts from Shakespeare and other old, white male playwright. It’s boring. It’s not relevant to me.” What she learned at home as a teen is still applied to her practices every day, living as a director in London.

“Every woman should be a drag king—or at least try it once.

Last year, Aboud discovered drag and fell in love with its ability to transform how we view and understand gender identity. Being born and raised in Trinidad, Aboud loves both dancehall and soca, but can’t ignore its sexist conduct. In the chorus of Vybz Kartel’s All Out, he sings, “Shut up your mouth and take f*#k”. There’s hardly any difference between that and Machel Montano’s Lip Service: You got de wine/Don’t waste me time/Ah tired of de lip service. Both songs demand that women hush and do their “duty” serving men sexually. “It’s hard to believe they’re talking about another human being”, says Aboud. “They could literally be talking about blow-up dolls, which is probably exactly what they want us to be.” And by dancing along in nightclubs and at fetes, we allow our local artists to preach and praise homophobic and misogynistic practices.

To combat that, Aboud applied for a time-slot in one of London’s drag shows and began dressing like a man to mock the “ridiculous” lyrics that our Caribbean artists record. She didn’t want to play victim by performing “a sobbing or naturalist” piece condemning it. Instead, she chose to make people laugh in discomfort. “Making the audience highly uncomfortable forces them to recognize the flaws in their perceived reality,” she says.

While playing a man, Aboud feels powerful. Her thoughts are more aggressive, her confidence is heightened and her sexuality is intensified and unforgiving. In her new role, she’s free to move her waist however she wants on the dance floor and express lust in ways women are not allowed to without slut shaming or ridicule. “Every woman should be a drag king—or at least try it once,” she says. “It’s the most magical thing.”

Don’t miss Emily performing drag alongside other passionate young artists at “Splintered: a cabaret of empowerment”, Friday, January 4, 2019 — doors open at 7 pm, show starts at 8 pm at Big Black Box (33 Murray Street, Woodbrook). Start the year with comedy, knowledge and joy. With a majority female line up you can expect original music, stand up comedy, poetry and drag (kings and queens). Tickets are $100 in advance or $120 at the door.

To reserve an advanced ticket or perhaps send some love and hate mail, email info@lagahooproductions.com 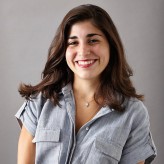