I anxiously stood by the door, listening to him thumping up the stairs. I left it ajar and stood creepily on the other side. A little more and I would have met him a few floors down, but I didn’t want to look completely desperate (though I was). He was a little guy, even shorter than I am. I heard him take a break from the stair climb somewhere around the third flight, and seeing this tiny human in front of me, weighed down in a bulky puffer coat, I could tell why he needed a breather. He smiled when he saw me, seeming almost happier than I was to see him.

“You Indian?!” He excitedly asked.

“Well, Trinidadian. But I have Indian ancest–“

He handed me my Tandoori take out, and turned around to head to his next delivery.  He wasn’t interested in hearing about my ancestry.

A similar run-in happened last year in Jersey City. I sat in a chair getting my eyebrows threaded.  I never quite got how these threading people talk while balancing yarn in their mouth, ripping out people’s facial hair from the root. Mad skills.

“Where you from? What’s your background? ” she asked nonchalantly.

“Well my great grandparents are from India”

“Well in Trinidad, they consider me Indian”

“But you’re not Indian.”

Indian people in New York City look at me like I’m an alien. I could feel the stares, and I see them whispering to each other when I walk by. They won’t claim me. Everyone’s trying to figure me out. In Trinidad, I had grown so accustomed with identifying as “Indian” that I never really thought of myself as something else, but these disappointed “Actual Indian People” or “Authentic Indian People” (shall we call them AIPs?) made me very aware that I am Trinibagonian. The way I dress; my loud lipstick and impractical stay-warm ensembles, are nothing like theirs. My hair is wild and short. I talk loudly and animatedly on my phone while  overtaking slow-walkers. I say “Hi” to people I walk by, even though I know they won’t reply. It’s just not the AIP way.

A pending identity crisis, I first thought of it. On so many forms here, you have to tick the Race box. I tick “Asian” for lack of a better option, when there is no “Other”. I am so not Asian though! But am I an “Other”? Eek.

People are always asking me about my ethnic background. It forced me to look at the unique qualities that make me Trinbagonian.

We often hear about the experiences of Mexicans or Middle Easterners, but who is a Trini here? At a party a couple weekends ago, my Trini/Bajan friend from back home was visiting. We got into the venue, Soca performers on stage, and a girl says to my friend that she is being very West Indian by keeping her jacket on inside! If the struggles with the climate are any indication, we are warm people and we thrive on connection. I met a stylist from St. Croix at a weekend short course at FIT last year. She remains one of my best friends in NYC. We connected literally based around the fact that we were from the islands. She heard my accent and her eyes lit up. We’ve been inseparable ever since.

Same goes with a Trinidadian fellow, who for months has become my go-to compadre for everything. He’s fun to lime with I’m sure, but I’m his friend primarily because of the accent. It feels like home! Trinidad-born Knitwear Designer Aisling Camps and I have laughed hyena-cally over our Caribbean phrases. We both were having a ridiculously stressful week, but one night, sitting on the floor at my then furniture-free apartment, over several cups of tea, we laughed man. We laughed so hard, digging into Trini slang, and basking in the nostalgia of how we speak. Her New Yorker friend sat across from us, watching us like we were crazy. He was right.

We are such a pelau of colours and cultures, but at the end of the day, we’re Trini!

Within our tiny twin islands, we use titles and wealth to divide us into segments. We stereotype people into categories like “The 1%”, “people past the lighthouse” and “West Accents”. We do so much to differentiate between ourselves, when to the rest of the world, we are one. If only we could see ourselves that way too. It is only when we bounce up somewhere foreign that we like each other so much more. You never miss the water til the well run dry!

So for a minute, I didn’t even know how to respond when they asked my ethnic story. Now I just say I’m Trini.

“But you look Indian” 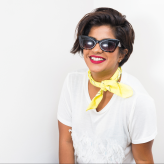